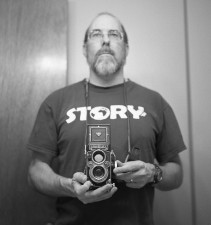 I’m very happy to be able to walk through this course with you.

I began my career on the production side of the film and television business. I am an award-winning writer, producer, director, cameraman, and editor. I’ve produced projects ranging from television commercials to documentaries to dramatic feature films in over 30 countries.

Since 1998 I have served as a missionary video producer. I co-founded 10X Productions (now a part of Pioneers) in 2005 for the production of Yai Wanonabälewä: The Enemy God, a feature-length motion picture set in the Amazon that has been distributed internationally.

Our team’s vision is that the good news of Jesus will be available to every person, on every screen. Partnering with missionaries, national churches and media outlets, we develop innovative access to the Gospel by producing creative content and training others to use media to reach people in their cultures.

Our work includes producing evangelistic and pre-evangelistic films in other cultures, media training workshops, web-based training, and individual mentoring. I teach film production and screenwriting classes in workshops and in formal on-line classes. I also hold an MFA in Professional Screenwriting.

I am married, with three children, and reside in Colorado, USA.